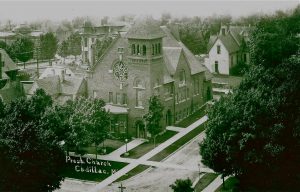 In the winter of 1874, a frame church building was completed on the present church site. The land had been set aside by George Mitchell, the founder of Cadillac, for this purpose. (He gave land for several church sites, as well as the school.) That church burned in 1903. The church that now stands at the corner of Harris and Simon Streets was built during the period 1904-1906. The cost was approximately $20,000. The original first floor ended at the north sanctuary wall. In the 1950’s the education annex was built.

The pews are the original pews, and have been refinished a couple of times in the past 93 years. The sanctuary was remodeled in 1965, when the present pipe organ was installed. The organ was purchased from the Moller Organ Company in Baltimore, MD. The seats in the alcoves and balcony were purchased in 1905 from the Congregational Church for 75 cents apiece. The bell, which is rung every Sunday to call people to church, was purchased in 1877, and hung in the frame building which preceded the present structure. That building burned in 1903. The bell was salvaged from the ruins and hung in the current tower. 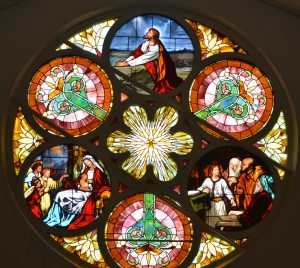 The beautiful stained glass windows were purchased from Schuler and Mueller in Chicago for $660.64, including installation. They were installed in 1905. (The windows were removed, cleaned, and repaired in the 1980’s at a cost of $47,000. The present replacement cost would be somewhere around $2,000,000.) The original contract specified “the glass in the above windows to be opalescent, the lead best-quality, and the workmanship first class. The entire work being guaranteed wind-and-waterproof.” Betty Best, in her book on the history of the church “First Presbyterian Church, The First Century,” says, “The subject matter of the windows gives evidence of thoughtful consideration in design. The message of the gospel is presented in both scene and symbol with a total emphasis upon the New Testament. There is, in fact, a noticeable absence of references to the patriarchs of the Old Testament common to many church windows; instead Jesus is the focal subject in every window.

Click below to view our most recent worship service.

8:30 a.m. – Worship ‘Round the Tables, an informal, non-traditional and  abbreviated worship experience held in the Fellowship Hall located in the lower level of the church. The Sacrament of the Lord’s Supper is celebrated weekly.

10:30 a.m. – Traditional Worship. Located in the Sanctuary. The Sacrament of the Lord’s Supper is celebrated monthly on the first Sunday of the month.

A “free little pantry” is located outside our building off of E. Harris Street. Anyone is welcome to take food from the pantry. Our motto is, “take what you need, leave what you can.”